NEW YORK – The Pakistani-American arrested on suspicion of driving a bomb-laden car into New York’s Times Square told U.S. authorities he acted alone but skeptical investigators are looking into his recent trip to Pakistan, a law enforcement source said on Tuesday.

Faisal Shahzad, a naturalized U.S. citizen born in Pakistan, was arrested late on Monday at John F. Kennedy International Airport in New York after being removed from a plane as it was about to take off for Dubai, officials said. Shahzad, 30, was due to appear in federal court later on Tuesday to face charges of “driving a car bomb into Times Square on the evening of May 1,” officials said. Had the bomb detonated, many people could have died, experts said.

Shahzad was on board Emirates Airlines Flight 202 to Dubai, United Arab Emirates, and the jetway had been pulled back when the plane was called to return to the gate, a law enforcement source said. Shahzad was booked through to Islamabad, Pakistan, via Dubai, a senior airline official confirmed.

“He’s admitted to buying the truck, putting the devices together, putting them in the truck, leaving the truck there and leaving the scene,” the law enforcement source told Reuters, speaking on condition of anonymity.
“He’s claimed to have acted alone. He did admit to all the charges, so to speak,” the source said, adding that investigators were still looking into his activities during a recent trip to Pakistan.

President Barack Obama has vowed that Americans will “not cower in fear” following the failed car-bomb attack in New York’s Times Square on Saturday. He said the incident was a “sobering reminder of the times in which we live” and vowed that justice would be done. President Obama said the FBI and police had “all the tools they need to learn everything we can”.

“That includes what, if any connection, this individual has to terrorist groups,” he said in a speech to the Business Council in Washington. Obama went on to say “hundreds of lives” might have been saved by the vigilance and quick action of citizens and the authorities in New York.

Eric Holder: “We will not rest until everyone responsible is brought to justice”
“Justice will be done and we will continue to do everything in our power to protect the American people.”

Shahzad, who was born in Pakistan and became a U.S. citizen last year, had recently returned from another trip to Pakistan, this time for five months, according to law enforcement sources. They said his wife was in Pakistan. It is believed that Shahzad’s Pakistani relatives reside in a middle-class neighborhood of Karachi called North Nazimabad.

Photos of Faisal Shahzad have been pulled from his facebook profile. 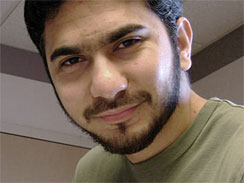 More than a dozen people with American citizenship or residency, like Shahzad, have been accused in the past two years of supporting or carrying out terrorism attempts on U.S. soil, cases that illustrate the threat of violent extremism from within the U.S.

In Karachi, Pakistani authorities have detained at least one man in connection with the Times Square bombing attempt in New York, two intelligence officials said Tuesday.

The man, identified as Tauseef, was a friend of Faisal Shahzad, the American citizen of Pakistani origin who is in custody in the United States over the failed attack, one official said. He was arrested in the southern city of Karachi, said the official, who like all Pakistani spies refuses to be named in the media.